How Our Access to Free Time Affects Our Happiness

Many of life’s decisions prompt us to weigh the value of time against the value of money. Put yourself in the shoes of a high-powered executive; for example, if you were to receive a job offer for a role that would double your salary but take away 75% of your free time, would you take it? 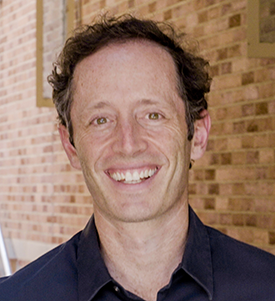 “Given the choice between more time or more money… about 70% of people chose money,” says Hershfield of his and Mogilner Holmes’ 2016 study findings. “But the people who chose time ended up being the people who were actually happier and more satisfied with their lives.”

The research brought up interesting questions about the relationship between happiness and time — specifically, are people actually better off with more time? Further, is it possible to have too much free (or “discretionary”) time?

In a recent interview with First Republic Bank, Hershfield discussed how their latest work is shining a light on the relationship between the amount of discretionary time people have and their subjective well-being.

To analyze the relationship between free time and happiness, Hershfield and Mogilner Holmes had to first define what “free time” and “happiness” really mean.

The researchers determined that our “discretionary time” refers to time spent on leisure activities or other pursuits where the primary function is using that time for pleasure or another worthwhile purpose (not simply whatever time remains outside of paid work hours). Using categories from the American Time Use Survey — which measures the amount of time people spend doing various activities — and the opinions of 2,550 participants in a crowdsourcing platform (Amazon’s Mechanical Turk), the researchers determined the activities that most people (i.e., over 90%) consider to be uses of discretionary time.

Hershfield and Mogilner Holmes looked at happiness, enjoyment and life satisfaction as the components of “subjective well-being.” They examined American Time Use Survey respondents’ well-being based on their responses to a ladder-style question: “Please imagine a ladder with steps numbered from 0 at the bottom to 10 at the top. The top of the ladder represents the best possible life for you. If the top step is 10 and the bottom step is 0, on which step of the ladder do you feel you personally stand at the present time?” Responses were mapped to how much time respondents had spent engaged in discretionary-time activities in the preceding 24 hours.

The impact of time on our well-being

“What we found is what researchers call a U-shaped relationship or a curvilinear relationship,” says Hershfield. “Too little time, people are less happy. That makes a lot of sense. But as it turns out, it’s not just that then the more time you get the happier you become. There’s actually this sort of drop-off where after a certain point, more time is not only not better for happiness, it can actually be associated with a drop in happiness.”

The study found that subjective well-being increases as daily discretionary time increases between zero and two hours, peaks between two and five hours and decreases above five hours. 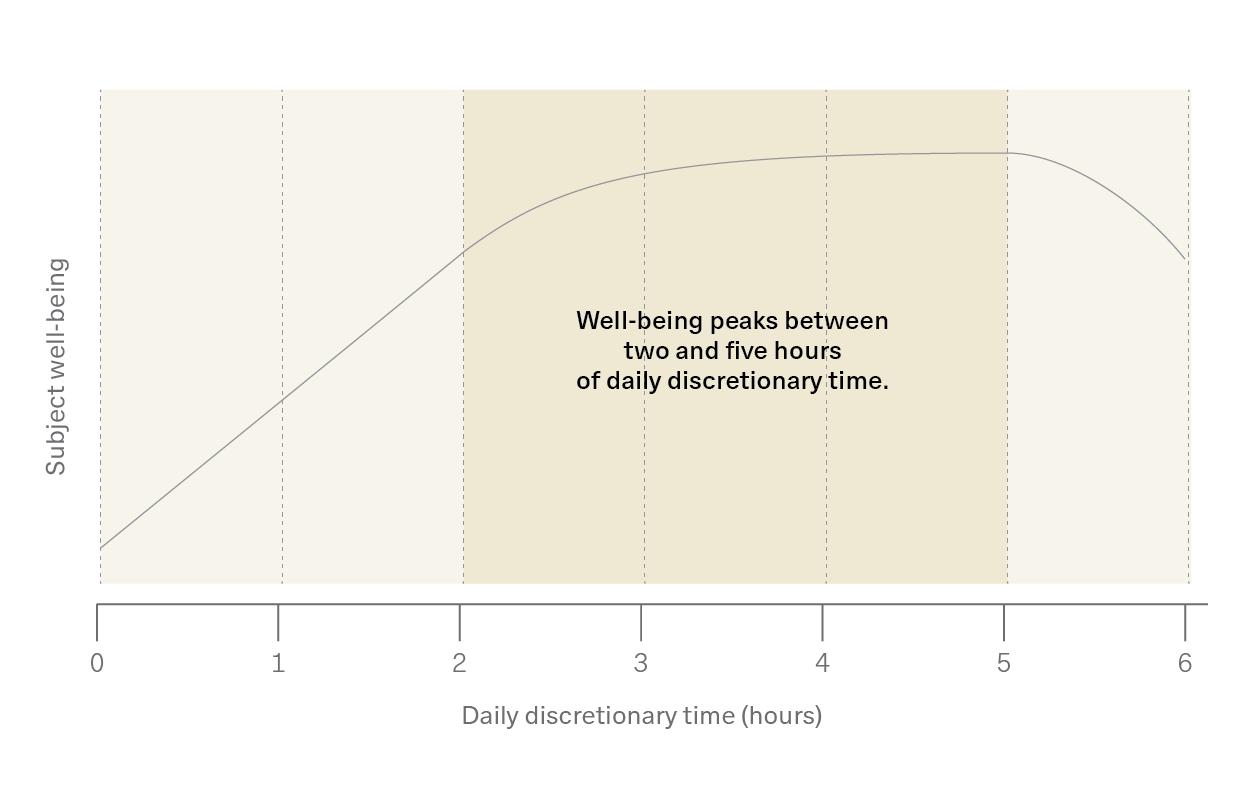 These numbers, of course, were specific to the datasets used by Hershfield and Mogilner Holmes in their research; it’s possible that they could vary with other populations. Two hours of discretionary time is not necessarily a minimum “need” for people, but it could be a baseline for further research.

The importance of using time productively

Additionally, Hershfield says it’s hard to say the “right” amount of time, as it depends on how that time is used. When people spent large amounts of discretionary time doing nonproductive activities (e.g., watching TV), they reported lower subjective well-being.

“More and more discretionary time, if it’s spent in ways that we would classify as productive — if it’s with other people, or if it’s doing something [like working out] that you think of as productive, then the sky’s the limit,” says Hershfield. “More of that continues to equal more happiness, which is the reason I’m really excited about this research.”

Of course, using our discretionary time productively may require us to change our biases.

People have an innate bias toward confirming our existing beliefs, for example, “rather than trying to seek out information that tests our beliefs and possibly disconfirms them,” says Hershfield. Applied to how we spend our time, that means that individuals may be biased to continue spending time the way they do now — rather than thinking more deeply about our decisions and opting to spend time differently.

The observed effect of discretionary time on subjective well-being is small but worth considering when big questions — like whether to take a big job offer — are on the table.

“It tells such a similar story to the other really powerful resource that we have in our life: money,” says Hershfield. “We’ve known from famous work from Danny Kahneman and Angus Deaton that there’s not a linear relationship between income and happiness, but rather that it’s complicated. After a certain point, more money doesn’t equal more happiness unless we start figuring out how to spend it better. And I think the same sort of story could be true for time as well.”

Moving from awareness to action 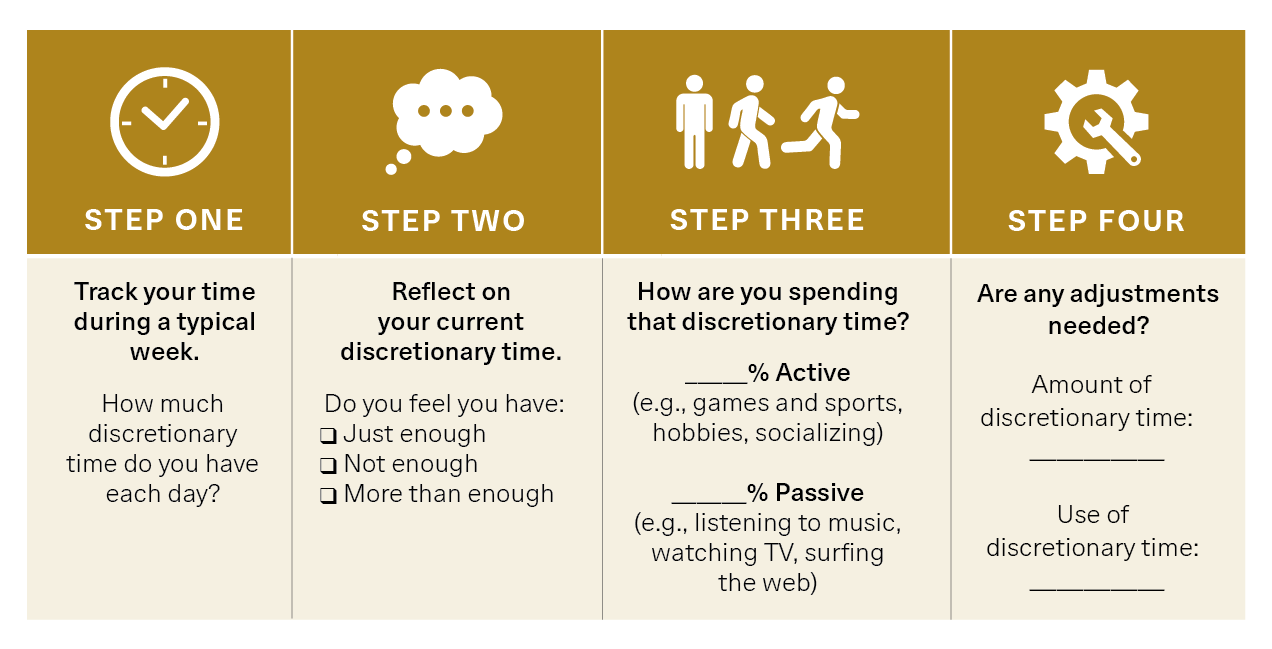 Ultimately, there may be no exact key to unlocking the “right” amount of free time. What Hershfield’s and Mogilner Holmes’ research can prompt us to consider, however, is using the time we have more wisely.

“So many people desire more time — everyone feels time-starved, everyone feels really busy,” says Hershfield. “But the reality is that if we go back to the data set [we used], people actually have more free time now than we ever had.”

“The average American worker has way more free time now than the average American worker did 40 years ago,” adds Hershfield. “However, a lot of us use that extra time on our phones and on TV. So a lot of people may say ‘I’m so busy, I’m so stressed,’ — and they may experience a constant barrage of news that can intensify that. But when push comes to shove, if you actually start thinking about what time we do have and how we spend it, it may tell a different story.”