For Startups, Raising Money is Eight Times Easier in the Bay Area

Some startups find their beginnings organically, getting built slowly from years of effort. These kinds of companies can be anywhere, and they often are. Startups kindled with the intent of rapid iteration and quick growth, however, tend to be clustered in the kinds of places we expect: San Francisco-Oakland-San Jose, New York, Boston, etc.

There exist many reasons for this, of course, but perhaps the top one is money. The Bay Area hosts the largest collection of venture capital wealth in the world. And while plenty of that money makes it out of the Bay, to places like Chicago, Austin and the East Coast, more of it stays local than anywhere else. Startups in the Bay Area, therefore, stand a better chance of raising some of this capital than if they were located elsewhere.

That’s not quite a declarative fact because there’s no way to conduct a truly scientific experiment with identical startups while only altering the location, but an examination of different datasets put out by FundersClub completes most of the picture, and offers some insight on the number of companies getting funded vs. the number of companies being started in a given city.

As part of a FundersClub examination of which U.S. cities are best for startups, FundersClub founders Alex Mittal, Boris Silver and myself tracked down three different datasets and combined them to express this ratio: 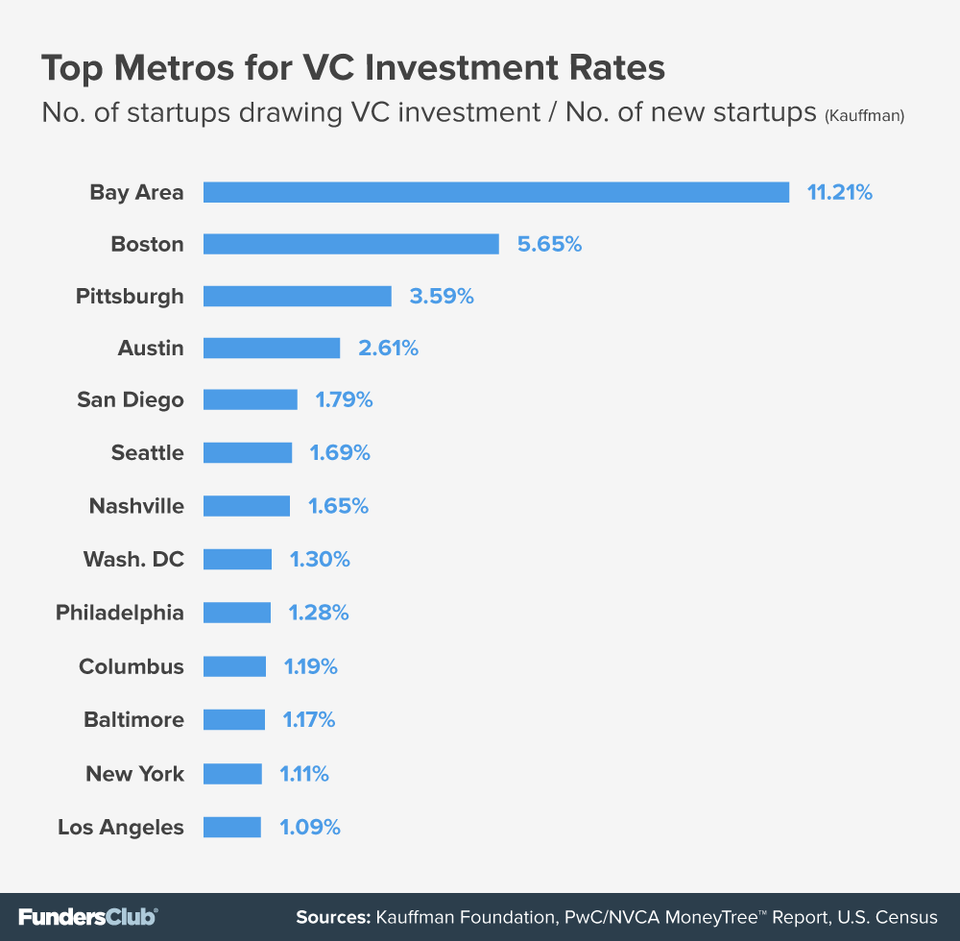 The results show that the Bay Area crushes all other places in this measurement, with a ratio of 11.21% of companies drawing VC investments to total number of new startups. The next closest metro was Boston, at 5.65%. The overall average among major metro areas in the United States was 1.4%, which puts the Bay Area at an 8:1 ratio compared with the rest of the company. The Bay Area and Boston skew the numbers quite a bit, so it’s also helpful to look at the median of 0.68% for U.S. metro areas. The Bay Area’s numbers are more than 16x the median.

A startup, as defined by Kauffman, is a company that is less than one year old and has at least one additional employee to the founder/owner. The problem with this measurement is that it will include companies that aren’t tech startups or are the kind of company that can never draw a venture capital investment, like a carpentry shop. But it’s still a useful measurement that gives us the best data available on the number of startups in a given metro area.

Even with the caveats, it’s clear that companies in the Bay Area draw investments at a much higher rate than anywhere else in the United States. But companies will pay for that access to capital, as it’s far more expensive to run a company from the Bay Area.

I talked to a number of founders and investors who had differing opinions on the matter. Some of them, like ThredUP CEO James Reinhart, who has raised $125 million for his online consignment shop, thought that being in the Bay Area was worth it, even with the added challenges of hiring in a tight and competitive market. “There is an 18-month period where you’re no longer brand new, and you don’t yet have the cachet or profile to hire a lot of the best senior people”, he explains. “We’ve crossed the chasm now, though, but everybody here has to compete hard for those better engineers.”

Other founders, like Mark Lawrence, CEO of SpotHero, thinks being based in elsewhere—his company is in Chicago—gives a company a form of arbitrage compared with the Bay. Chicago isn’t cheap by national standards, but some costs, like office space and salaries, can be 30% to 40% lower compared with San Francisco.

Josh Dziabiak draws a line between cities that may third tier versus second tier. As co-founder at The Zebra, a consumer platform for comparing insurance quotes that has raised a $17 million A round, Dziabiak elected to move the company from Pittsburgh to Austin, even though he had previously started two companies in Pittsburgh, growing one of them—Showclix—to more than $100 million in revenue. He felt Austin offered deeper venture pockets as well as a deeper talent pool that The Zebra will require as it grows. Dziabiak considered San Francisco and New York, but felt the added cost wasn’t worth it. “My natural inclination is to tell people to go to a second-tier or third-tier city,” Dziabiak says. “There is a big delta in the cost of living from San Francisco to Austin.”

Founders should be wary of leaving behind good situations elsewhere to pick up everything and move to the Bay, says Patrick Gallagher, general partner at Crunchfund. “If you start a company in a market that has good access to capital at all stages, like New York or Los Angeles, and your technical network is in those cities, then don’t move to Silicon Valley. You’ll end up spending all your time networking and recruiting to hire technical talent.  We’ve seen many of our portfolio companies move to Silicon Valley and struggle with recruiting.”

Some startups try to have it both ways—getting the invaluable networking and relevance that comes with being in the Bay Area, along with the lessened costs and hiring burdens of being elsewhere. Thunder, a creative platform for ad creation that has raised $11 million, is based in San Francisco, but aims to hire more and more people for its Seattle offices, where costs are less. The company plans to add 20 people to its more northern location, which will actually push its headcount past that of its San Francisco base.

Thunder CEO Victor Wong still believes that the Bay Area is the best place for startups, “But you grow to where your best supply of talent, customers, and capital exist to fuel your growth.”

This article was written by Christopher Steiner from Forbes and was legally licensed through the NewsCred publisher network.

Investors should seek financial advice regarding the appropriateness of investing in any securities, other investment or investment strategies discussed or recommended in this report and should understand that statements regarding future prospects may not be realized.

The investment services and products mentioned in this document may often have tax consequences; therefore, it is important to bear in mind that First Republic (or FRIM) does not provide tax advice. The levels and bases of taxation can change. Investors' tax affairs are their own responsibility and investors should consult their own attorneys or other tax advisors in order to understand the tax consequences of any products and services mentioned in this document.

The views of the author of this article do not necessarily represent the views of First Republic Bank.