The All Stars Project Harnesses the Power of Development through Performance

Created in 1981, the All Stars Project is a national nonprofit that engages inner-city youth by using performing arts to teach important life skills. With three afterschool programs, kids can practice or rehearse scenarios that will prepare them for a successful adulthood — with feedback from peers, corporate partners and their community. Since the first All Stars talent show — held in a church basement in the Bronx — it has become a six-city, well-funded organization that has opened doors for tens of thousands of kids. Gabrielle Kurlander, President and CEO for 30 years, tells us what the All Stars Project has done to stay on top of its game.

Both on stage and off, our young people are rehearsing different roles and the skills they need to perform them well.

What drew you to the All Stars Project?

My background and training are in theater and performance. I was 19 and working as an actor in New York when I went to an All Stars Project event, and what drew me in was a combination of the use of performance and theater to help people move beyond their circumstances and create new lives. In 1990, after volunteering with them for a few years, I became their first employee. Since then, I’ve seen over and over what a difference All Stars makes in kids’ lives. Equally, it has changed the lives of business people and the affluent — they become more aware of all the issues that poverty produces. We’re looking to develop everybody and contribute to the solution together. It’s beautiful.

All Stars is currently in New York City, Newark, Jersey City, Dallas, Chicago and the San Francisco Bay Area. What factors are involved in determining the communities you serve now, and do you have plans to expand?

We go into cities where we have connections. Our growth strategy involves being part of a community first, then talking to them and understanding what they need before taking action. The Development School for Youth came from what young people were asking us for: real-world experience. A lot of them ask for jobs, which is understandable, but we wanted to provide something beyond that — the skills and opportunity to have a career. It has also helped to have strong business leaders in those cities that want to partner with us. As for the future, we’re really looking to bring our programs into other nonprofits and other institutions through training and supervision, rather than through the expansion of our footprint. Where we’re really doubling down is in the cities that we’re in, where there are millions and millions of more young people to reach. 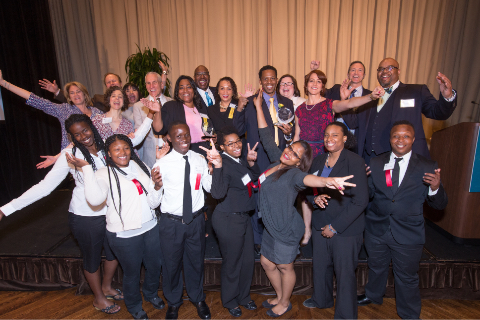 All Stars says its focus on opportunity differs from typical social service organizations. How do you differentiate yourselves from other nonprofits addressing poverty?

One is that we’re 100% privately funded, which is pretty unusual in the youth development space. That enables us to be very innovative. Another is that we do person-to-person grassroots outreach. Last year we personally spoke to more than 117,000 people. Also, we don’t seek the best and brightest young people, but all young people who are seeking development tools so that they’re ready when opportunity comes. Many programs ask for grade point average or ask school counselors to recommend young people who are exceptional in some way. We’re a program for the kids who might be overlooked in traditional school settings.

Why is performance such an effective method for development?

Both on stage and off, our young people are rehearsing different roles and the skills they need to perform them well. When they’re practicing for a talent show, part of their development is to give and receive feedback. Or if they’re in our Development School for Youth, they might be practicing a job interview or having a conversation with a business leader, but they’re also figuring out if the performance should be about bragging about themselves or asking a lot of questions.

What is your Operation Conversation: Cops & Kids program?

Cops & Kids is a police-community relations program run in partnership with the New York City and Newark Police Departments. Since its launch in 2006, the program has involved thousands of inner-city youth and police officers. We have 10 police officers in full uniform, including their weapons, come into workshops and speak with 10 young people. They play improvisational games like you do in the theater, they go around and talk about the hardest thing that ever happened in their lives. In this performance, cops and kids create a new, humanized relationship together — one that is usually very fraught. And this breaks down barriers.

Can you tell us about your “involvement philanthropy” approach, and how your partners benefit from working with All Stars?

When we reach out to corporate partners, we don’t ask for a check. We believe in something called involvement philanthropy. In this approach, we ask people to come and be a part of what we’re building. In return, our sponsors have given thousands of hours of their personal time to share their lives and their expertise. They might lead a workshop, attend a talent show or open up their workplaces to some of the nation’s most marginalized young people. And they tell us all the time that these experiences transform them. I think that the onus on needing and wanting to work with others to build something together differentiates us from other afterschool programs.

How do you measure the success of All Stars’ programs?

In partnership with Southern Methodist University, Center on Research and Evaluation (SMU CORE), we created a system that tracks development beyond traditional measures like educational competency. For instance, the ability to appreciate things. In order to develop your sense of appreciation, you have to have strong growth environments. Another measure is an open worldview. Are you comfortable being with people who aren’t like you, and being in environments that are very different from where you grew up? Developing these skills could make the entire difference in your success. The SMU CORE evaluation will be done in 2020 and we’re going to make it available in different ways to people in the nonprofit field.

Can you explain what ADI is?

Afterschool Development Initiative, or ADI, is a set of activities, conferences, trainings and research that is advancing and further shaping “afterschool” as a field, discipline and strategy for social transformation in America. At the heart of this new initiative are our Afterschool Development Working Groups — leaders and front-line practitioners from over 250 community, civic, faith, cultural, education and other organizations that are bringing afterschool development to communities throughout the country. When the All Stars Project started in the South Bronx 38 years ago, the kids said they had nothing to do and needed something positive. ADI is just one more way to bring positivity to more kids.