Investor concerns continued to mount over a shifting narrative away from demand-pull and toward cost-push inflation, influenced by a shortage of workers and supply bottlenecks. However, you could have been fooled by markets as equity prices advanced during the week. Whereas inflationary forces were previously thought to be more short term or “transitory,” additional evidence points to them being more persistent. It is important to note the term “transitory” is subject to change, aligned with the Federal Reserve’s (the Fed’s) shifting expectations. Supply bottlenecks, such as higher freight and transit costs, semiconductor shortages and logistical issues, have persisted, while companies struggle to gain and retain workers, faced with upward wage pressures and rising supply costs. While these concerns add to the “wall of worry,” U.S. equity markets put aside inflation fears and soared after declining on Monday, fueled by a strong kickoff in the new earnings season.

A “new normal” of lower labor force participation has spread out across different geographies at various wage levels (see Figure 1). Job seekers have been more “choosy” and empowered than ever, given higher wealth, wages and savings. September’s high quit rate and decline in labor market participation reflect these emerging demands, which are increasing costs for employers and shifting them back to the consumer, driving prices higher. Corporate costs will likely remain elevated as headwinds don’t appear ready to abate soon, as supply and labor shortages continue. On the upside to the slower-than-expected labor market recovery, initial unemployment claims reached a new pandemic low. Despite the balance of data remaining weak, the Fed remains accommodative and has not moved from its stance that interest rate increases appear far-off or in the distant future.

September’s rise in Core and Headline Consumer Prices Indexes (CPIs) demonstrates that supply chain issues and rising inflation are further dominating the economic growth outlook (see Figure 2). September’s CPI jumped from 2.8% to 3.8% year over year. Shelter, which comprises 33% of total CPI, causes the most concern due to the major disconnect between home prices and rents. The Case Shiller U.S. National Home Price Index increased over 20% year over year as of July, while Rent of Primary Residence has only increased by 2.4% year over year and owners’ equivalent rent only increased by 2.9% year over year in September. Generally, home prices lead rents by 9 to 12 months, so we expect a pickup in rental prices to drive the shelter component of the CPI higher in upcoming months.

Expectations for inflation to move from a boil to a simmer were largely based on the premise that energy prices would revert to lower levels. But the narrative is shifting, with analysts raising energy expectations in the second half of 2021 and through 2022. Headline CPI rose by 0.4% month over month in September, led by a 2.7% rise in natural gas prices. As energy prices surge, other commodities and transportation endure the cascading effects. September’s Core CPI rose by 0.2% month over month, revealing the second derivative contributions from their close ties to energy prices and supply for production. With no signs of abating in the short term, the energy crunch could continue to heighten inflation in cyclical components.

Lack of energy supply is being driven by government regulations, labor shortages, low corporate capex and OPEC+, while demand is pressured by the Emerging Markets recovery. Higher-for-longer energy prices would likely drive energy equities higher but keep the CPI, personal consumption expenditures (PCE) index and inflation expectations higher than expected, cutting into personal savings and incomes, and dampening consumer confidence. However, we are much closer to the ceiling for energy prices than the continuing trend. Once we surpass winter, the energy crisis should ease and supply will begin to accelerate more, in our view.

U.S. equities soared higher this week, after touching lows on Monday, posting its biggest gains since March on Thursday. Beneficiaries shifted from technology and growth segments, which have enjoyed a rotation since spring to more interest rate sensitive areas, along with segments that stand to benefit more from higher energy costs and cyclicality. With peak growth in the rear-view mirror, equities are still poised for positive gains, in our perspective. Investor sentiment, which is more bearish than warranted, gives us confidence that positioning is not stretched; meanwhile, the first inning of solid earnings reports provides fundamental support for stocks. We continue to monitor corporate guidance and expect companies to mention headwinds, including supply chain bottlenecks, wage pressures and continued effects of the pandemic. However, we expect that corporations are setting their expectations lower to allow for potential upside to beat those expectations.

From an investor standpoint, we remain supportive of the global growth outlook but recognize that risks have risen. In our view, equities are well positioned to benefit from nominal growth boosting earnings and a dearth of attractive alternative investment opportunities. We recommend remaining overweight in equities while evaluating risk exposures in case of periods of episodic volatility. 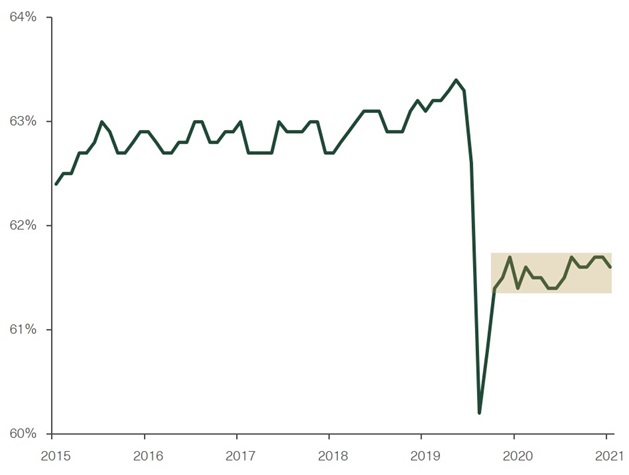 • U.S. equity markets put aside inflation fears and soared after declining on Monday, fueled by a strong kick-off in the new earning season.
• Investor concerns continued to mount over a shifting narrative away from demand-pull towards cost-push inflation.
• September’s rise in Core and Headline CPI demonstrate that supply chain issues and rising inflation are further dominating the economic growth outlook.