California is surging with electricity. The Golden State is crisscrossed with 25,526 miles of high-voltage transmission lines and 239,557 miles of distribution lines that deliver electricity to neighborhoods and businesses. If only a few inches of those cables become corroded and overheat, they can give off sparks and start wildfires that devastate communities.

Kaitlyn Albertoli and Vikhyat Chaudhry want to make the process of finding those issues easier and more efficient. In 2017, the entrepreneurs launched a startup called Buzz Solutions in Palo Alto, CA. They use artificial intelligence (AI) — a technique where computers are programmed to think like humans and mimic their actions — to improve power-line inspections. As a result, the company is revolutionizing the utility industry with new technology that not only saves time and resources, but it can also prevent damaging wildfires.

Where did the idea for your technology come from?

Kaitlyn: Vik and I met in a startup class at Stanford University in the spring of 2017. The focus was tackling big problems in the sustainability space. We originally looked at the wind turbine inspection market, because of his background and the research work he was doing. However, one of our professors suggested we explore what was happening in the power space using drones and AI technology. We reached out to over 90 power companies and interviewed 35.

What did you learn from those interviews?

Kaitlyn: The power companies were beginning to capture much more data leveraging drones and helicopters, but they had no way to quickly analyze this data. It took them six to eight months to draft inspection reports and perform maintenance. During that time, the problem could cause a spark that caused a power outage or started a wildfire.

Historically, how have power-line inspections been conducted?

Kaitlyn: Traditionally, utilities have conducted inspections with helicopters or on foot. In helicopters, the linemen fly across the infrastructure with a pilot and another individual holding a clipboard to record any visible abnormalities. On foot, a utility would have hundreds of linemen walk hundreds of miles under power lines, looking up at them with binoculars. We asked why they were walking in the heat in the middle of the day or using expensive helicopters, instead of using drone technology.

Vikhyat: It was shocking to see how little was being done in the inspection space to innovate and adopt some of these technologies that were already actively and privately available. This really sunk in when they sent us the first data sets containing their historical inspection data. The information arrived on thumb drives and VHS tapes.

How does your software platform work?

Vikhyat: Power companies can upload data securely, such as images collected by helicopters or drones, onto our data platform. The AI analyzes the images and determines if there is an issue, such as insulation being broken or if vegetation is growing too close to the line. The flagged issue is plotted on a map, making it easy for users to understand exactly where the problem is. The results can be integrated with a work-order management system, so a ticket is created for a maintenance team to address the problem. 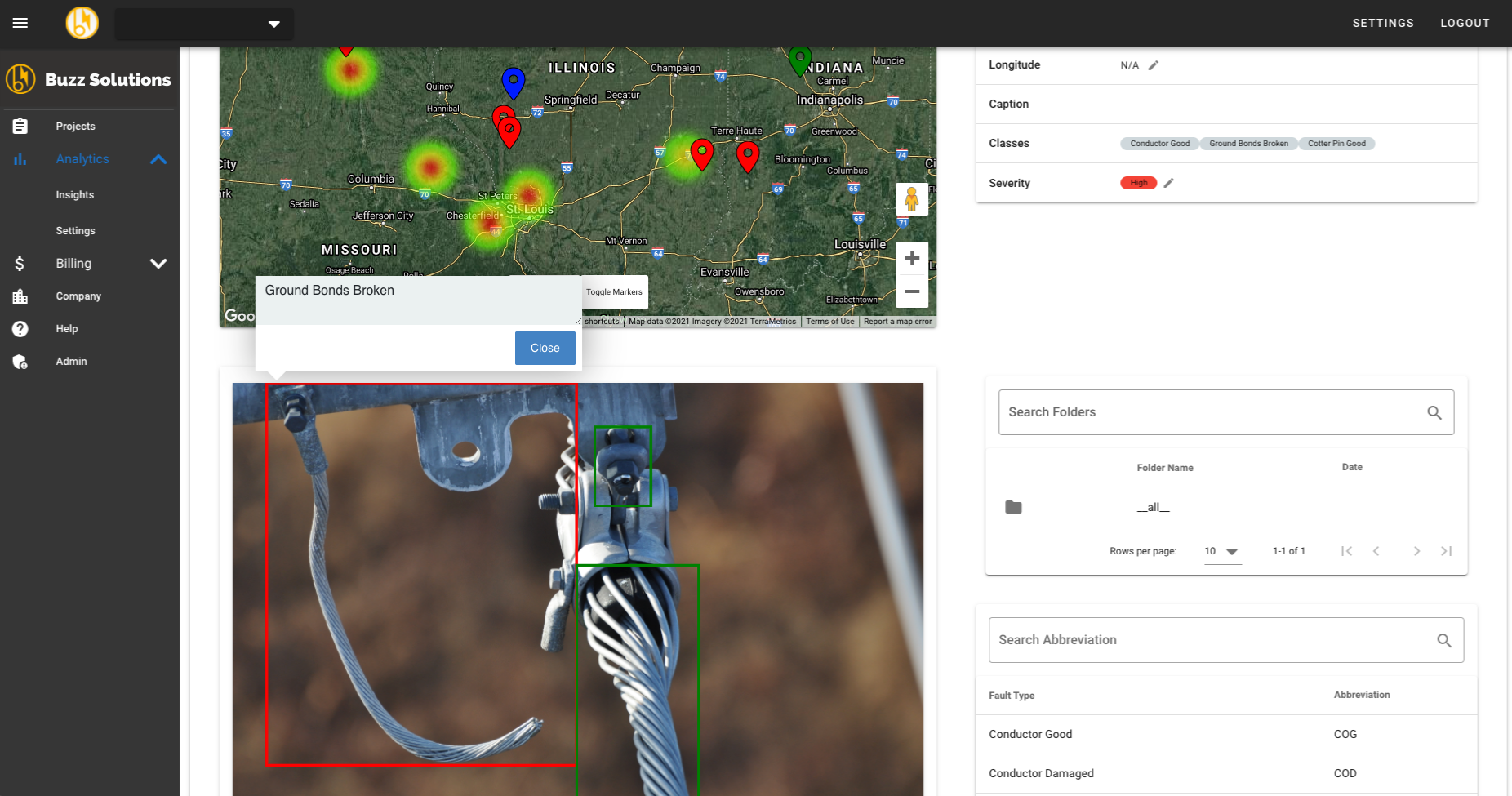 What are the benefits for the power companies?

Vikhyat: It’s a mundane process for humans to go through thousands of images. This is where machines and AI excel because they improve with more quality data, compared to a human who loses efficiency while handling routine, repetitive tasks. This frees the engineers to use their skills in other areas where you truly need the insights that only humans can provide. Our platform reduces the cost of inspections by at least 50%, and cuts months out of the time it takes to resolve issues.

How did you convince power companies to try your technology?

Kaitlyn: We were two young people entering a very established industry. There was lot of mistrust, and there was a lack of understanding of what we could bring to the industry. We had to find the right people at the right stage at the right utility who had the right vision.

Vikhyat: Initially, we targeted the innovation groups at utilities. They would run pilot programs, which validated our platform and boosted our reputation. Third-party drone and helicopter companies, which contracted with the power companies, also partnered with us. Now, vegetation management departments, which are responsible for trimming trees around power lines, are coming aboard. One Vermont utility told us that vegetation management was their second biggest expense behind payroll.

What issues did you confront in gaining adoption for your technology?

Vikhyat: There was a big fear, and there still is a fear, that we were going to take away jobs with AI. Which is not the case at all. We had to demonstrate to utilities that our tool was going to make their jobs easier, safer and more efficient.

How did you demonstrate your technology to the utility companies?

Vikhyat: Recently, we added a feature to our software platform called “Human-in-the-Loop.” This allows the subject matter expert to examine the data and see if the AI has missed anything. This improves our technology and gives them confidence in the accuracy of our predictions. We originally called the feature “Annotify,” but by giving it a more user-friendly sounding name, people felt like they were involved in the process rather than left out.

What is your vision from this point forward?

Vikhyat: The utility infrastructure is the backbone of the economy. The infrastructure is aging and we’re starting to see problems with it. We want to work in this industry that is still using antiquated processes for infrastructure inspections, revolutionize it and disrupt it with modern technologies of drones, IoT and AI.

Kaitlyn: I’m from Southern California, and I grew up in an area heavily impacted by wildfires. This is a pressing issue that needs to be addressed. It’s rewarding to be developing amazing technology, but it’s even more rewarding to make the world safer for everyone who turns on a light switch every day.

The views of the interviewee of this article do not necessarily represent the views of First Republic Bank. This information is governed by our Terms and Conditions of Use.

The past year has presented new challenges when integrating ESG policies in their investment process. Read more

Both local and non-local VC investors agree that New York was resilient in 2021. Read more