Bees are vital to the global food supply — and they’re in crisis.

One out of every three mouthfuls of food depends on pollinators such as bees, according to the World Wide Fund for Nature (WWF). Almost 90% of wild plants and 75% of leading global crops depend on pollination.

James Webb and Abraham McCauley founded Beemmunity to restore wild bee populations that have been declining due to intensive farming practices, excessive use of agricultural chemicals and higher temperatures associated with climate change. The company produces sustainable pollinator all-in-one habitats, or “rewilding kits,” which people can purchase and set up in their own backyards.

“We're giving back the forage that the bees have lost, we’re giving back the habitat that they've lost, and we're also giving them a superfood, which will hopefully help make them happy and thriving,” says McCauley, Beemmunity Co-Founder and COO.

Beemmunity’s backyard-friendly habitats are a shift from the industrial product they originally envisioned for their business. In fact, Beemmunity’s unique entrepreneurial journey can provide life sciences founders with a few lessons on what it takes to make a consumer-friendly environmental product a reality. 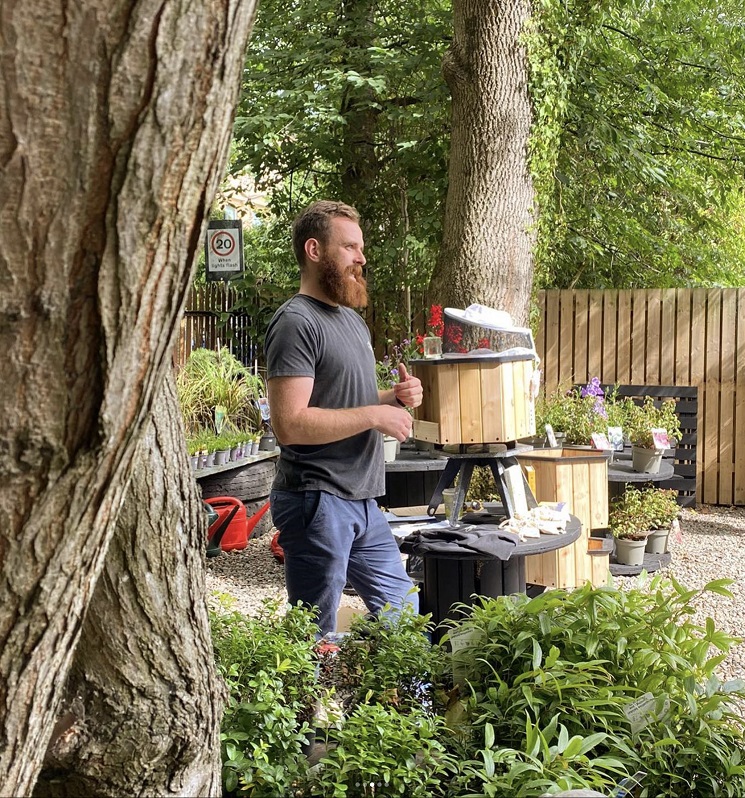 Beemmunity launched the WildHive in June 2022 as “an easy way for people to make a big contribution to the fight for pollinators, wherever they may live,” says Webb, Beemmunity Founder and CEO.

As of September 2022, Beemmunity has released their first batch of WildHives in Europe — rising to the company’s mission of helping restore bees’ basic needs. (They plan to scale carefully based on customer feedback and environmental impact data, including the number of bees supported.)

But the mission wasn’t always crystal clear. Beemmunity originated with an idea Webb came up with for a class project as a graduate student at Cornell in 2019. Webb’s professor had challenged each student to develop a game-changing idea using biomaterials; Webb, who had little knowledge about bees at the time, chose to focus on the idea of “cleaning” bees of harmful pesticides using a detoxifying treatment. When he presented the idea, in full bee costume, it was a hit.

“My professor really liked the idea, and I ended up extending my master’s degree and spending two years working in the lab with him on it,” says Webb. “We developed the technology and found it to be successful to a significant degree.”

Webb developed a pesticide antidote, which took the form of pollen-sized microparticles fed to honeybees. The microparticles, which could be fed to bees via a sugar syrup or pollen patties, would detoxify the insecticides before they could be absorbed and harm the bees.

After a series of in vitro experiments, the researchers tested the system on live bees in the lab. Bees that were fed the microparticles with a high dose of the enzyme had a 100% survival rate after exposure to the pesticide malathion. Meanwhile, the unprotected control bees died within days.

Webb and his professor recognized the potential to sell the technology as a product to beekeepers and brought McCauley, who had a financial background, into the business. As the team grew in their understanding of the gravity of the bee crisis, they felt increasingly compelled to help solve it — leading ultimately to their mission of restoring bees’ basic needs.

“The more we found out [about the bee crisis], the more we wanted to do something about it,” says McCauley.

Lesson #2: Be open to pivoting your strategy

Beemmunity then entered a biotech accelerator program that helped their team develop a plan to commercialize the product. As part of the team’s efforts to explore selling the technology as a pesticide antidote to commercial beekeepers, McCauley spent three weeks in New Jersey during the pollination season for blueberries — experiencing the reality of the beekeeping industry and of honeybees in general. The experience led Beemmunity to re-examine their industrial product.

“I reported back to James asking, ‘does this align with our mission or our values in a way?’” says McCauley. “Honeybees are another part of large-scale agriculture; there was no way for us to make an impact on supporting the diversity of the 20,000 species of bees, which was very important to us.”

Webb adds: “We still wanted to make an impact on nature, and we still wanted to create a movement, so we asked ourselves, ‘How can everyone actually help bees — and not just honeybees in industrial agriculture, but the native, wild bees that are dying even faster?’”

Answering that question led Beemmunity to develop a new bee “superfood” that they focused on feeding to wild bees instead of honeybees. Since feeding wild bees requires providing a habitat for those bees, they designed and crafted what would ultimately become the WildHive — a consumer product designed for anyone to use, in their own homes and communities, to benefit the environment.

Lesson #3: Rally people around a common cause, and continually learn from them

At a time when many environmental issues can be divisive, the fight for pollinators is a step that can have a massive impact on climate change and nature.

“Bees are a big issue in the world, and they're dying,” McCauley says. “We’re hoping to foster a more sustainable world.”

Beemmunity’s team even believes that contributing to the health of bees is something that can bring people together — provided there are easy-to-use products helping them make that contribution.

“Make sure that your customers can make the product or service part of their lifestyles without too much friction,” advises Webb. “You need to think about the customer and make your offering attractive. People want to be part of something.”

It’s part of Beemmunity’s vision to make their customers part of something big. As customers use their WildHives, the Beemmunity team will track the numbers of bees supported and the resulting impact. Right now, Beemminity is soliciting especially detailed feedback on customers’ experiences with the first-generation WildHives to inform future product releases and help them map which wild bee species are found in customer locations.

“Two things that we obviously want to measure are the efficacy of our products as to whether they're increasing the local pollinator species, as well what species see that difference,” says Webb. “We’ll map the data to see if there's a network-effect benefit for any WildHives that are located in close proximity to one another.”

As Beemmunity refines their approach and scales their operations, “we’re confident that farmers and anyone in agriculture would be very excited about that benefit because more bees may mean more (crop) yield, and more yield can mean more people fed,” says McCauley.

Beemmunity’s long-term vision is to replenish pollinator habitats, one community at a time, says McCauley. “With more and more WildHives out there, more and more connections can form between habitats and larger numbers of bees can be supported.”